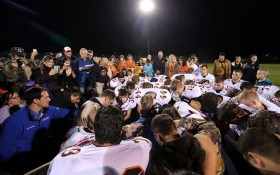 The atheist assault on Christianity continues at a breathtaking pace.

And some liberal schools are backing down.

Virginia Tech is the latest to bow to pressure from an atheist legal organization, submitting to the demands the school stop helping chaplains to attend games with the football team.

The southern school has announced they will no longer give so-called “preferred access” to the school’s football bowl games, which lets chaplains travel with the team and join them on the sidelines for prayers.

Virginia Tech has also demanded chaplains reimburse the institution for travel expenses to the 2014 Military Bowl.

It doesn’t stop there. Now the atheists have announced a South Carolina college football team as their next target.

The atheist group, the Freedom From Religion Foundation, is publicly complaining about one of the University of South Carolina’s football team’s coaches, Adrian Depres. FFRF claims Depres’ modest salary – a mere $5,400 a year – and his travel expenses shouldn’t be paid for by the school because Depres leads team prayers and counsels players.

Former head coach Steve Spurrier spoke of Depres saying, “He preaches the Word – the gospel … what we all need to hear.”

The FFRF could threaten a lawsuit to get Depres fired for this preaching.