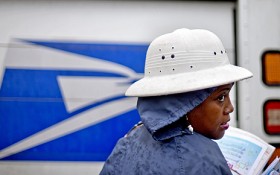 Ouch, $5.1 billion… That the loss the Postal Service reported on Friday for the just-completed 2015 fiscal cycle — but that’s a slight improvement over 2014.

The loss reflects continued erosion in the delivery of first class mail as well as expensive mandates for funding retiree health care.

There was good and bad news in the Postal Service’s year-end results. Revenues were up, and it made an operating profit of $1.2 billion, reflecting continued growth in its package delivery business.

But a special rate surcharge is set to expire next year, which promises to cut revenues by $2 billion annually, and volume of mail delivery should continue to shrink. Expenses continue to rise despite slower mail delivery.

“The road is difficult for a number of reasons,” said Chief Financial Officer Joseph Corbett. “Without the surcharge, for example, in 2015, we would have recorded a controllable loss of $800 million, not income of $1.2 billion. Also, our costs continue to escalate.”

The service continues to press for legislation that would provide relief from its funding requirement for retiree health benefits and give it greater flexibility in setting rates.

It’s the ninth consecutive year that the Postal Service has lost money. Mail volume is down as people rely more and more on email on online bill payments. But online shopping has led to significant growth in its package delivery business, which has grown by 50 percent over the past five years.

Lawmakers such as Sen. Tom Carper, D-Del., have tried for years to overhaul the Postal Service, but proposals such as ending Saturday mail delivery and closing more post offices have met with resistance from other lawmakers and postal workers.

“The USPS’ continuing financial upswing shows that dismantling services to the public would be precisely the wrong path to take,” said Fredric Rolando, president of the National Association of Letter Carriers. “This impressive performance is no fluke. It results from two structural factors: An improving economy is helping stabilize letter revenue, and Internet-driven online shopping is sending package revenue skyrocketing.”