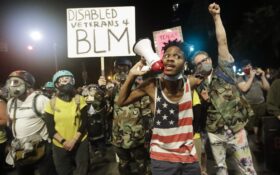 The city of Portland has been under siege by radical leftists – but its mayor has refused to put an end to the anarchy.

And now, the people of Portland on both sides of the aisle are sick of it.

A new survey from a group called Yes for Real Community Oversight of Police finds 63 percent have a negative view of the mayor while barely one in four – just 26 percent – have a positive one.

Wheeler has presided over a city on fire with rioters and vandals holding “protests” that frequently devolve into violent confrontations with police, each other, fires and – in at least one case – has erupted in a deadly shooting.

“We don’t need your politics of division and demagoguery,” Wheeler wrote in a letter to Trump (which he immediately shared with the media).

Federal law enforcement left, and the anarchy erupted once more.

Now, the city is speaking loud and clear: They’re sick of Wheeler’s failures to control the violence.

“Caving to the radical Left isn’t working out so well for the mayor of Portland,” observed Rep. Doug Collins, R-Ga. “It turns out the majority of Americans actually want to feel safe in their cities.”

Wheeler is in the fight of his political life at the ballot box as a result.

He failed to win a simple majority in the city’s May election for mayor, which means a runoff vote is set for Nov. 3.

Although Wheeler is a Democrat, the Portland mayor’s gig is nonpartisan and parties aren’t listed on the ballot. As a result, he’s not facing a typical Democrat-vs-Republican scenario.

Instead, he’s running against progressive activist Sarah Iannarone, who if anything is even further to the left.

“I am antifa,” she wrote on Twitter last year. “I stand proudly beside the good people of this city organizing in countless ways every day to oppose hate in its myriad forms.”

Her whole case is not that Wheeler is too far to the left… but that he’s not far enough; indeed, leftist protesters have been jeering Wheeler at his public appearances (Warning: harsh language):

People have surrounded the mayor, cursing him and calling for resignation. pic.twitter.com/o0s1azbi2R

Portland protestors light fireworks outside of Mayor Ted Wheeler’s condo on his birthday, as they march through downtown demanding he resign pic.twitter.com/aCbC9R6LOj

He’s said he will move from the building as a result, but the leftist crowd doesn’t want him to just leave his condo.

They want him out of office.

“When you ran for mayor you cloaked your campaign in the rhetoric of progressivism,” Iannarone said in a video aimed at Wheeler over the summer. “But when the time came to lead, you abandoned those values.”

In other words, the city will be under leftist control no matter who wins in November.

But could the state itself be another story?

The riots have spread from Portland to other cities in Oregon including Salem – and there’s a chance the unrest has taken on toll on the left statewide. That means there’s an outside shot that could cause this normally deep-blue state to turn red in November.

That may sound impossible, given that Oregon hasn’t voted for a Republican for president since Ronald Reagan in 1984.

Other than 2000, when George W. Bush came within half a point of Al Gore, most presidential elections in the state haven’t even been close.

But could that change?

“Oregon is the closest thing to a presidential swing state that hasn’t been polled *at all*,” pollster Nate Silver wrote on Twitter. “So one poll there would be nice.”

He seemed skeptical it could go red – but also called it an interesting state to check in on, poll-wise.

“It’s sort of white-working class,” he wrote. “Portland is a national story. Is it becoming bluer like WA or CA or moving in a different direction?”

But it hasn’t been polled – likely won’t be polled – perhaps making the state ripe for a big surprise on Election Day on the order of Wisconsin in 2016.

After all, the last time a Wisconsin voted for a Republican for president… was Ronald Reagan in 1984.