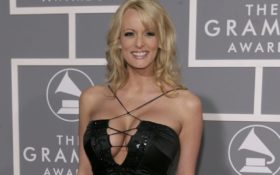 At the same time, developments in the strange case fueled questions about federal campaign finance laws.

“Everything is off now, and Stormy is going to tell her story,” her manage, Gina Rodriguez, said Wednesday.

The actress first detailed her account of an alleged extramarital affair with Trump in 2011, when the celebrity gossip site The Dirty published it but then removed the material, according to the site’s founder, Nik Richie.

Her story then remained largely out of public view until a month before the 2016 presidential election, when the website The Smoking Gun published an account that went mostly unnoted by major news organizations.

In January, The Wall Street Journal reported that a limited liability company in Delaware formed by Cohen made a six-figure payment to the actress to keep her from discussing the story during the presidential campaign.

Cohen said the payment was made with his own money, and that “neither the Trump Organization nor the Trump campaign was a party to the transaction with Ms. Clifford, and neither reimbursed me for the payment, either directly or indirectly.”

As in that case, the payment by Trump’s lawyer was not reported as a campaign expenditure nor an in-kind contribution, and the origin of the money is still unclear, said Paul Ryan, a vice president at Common Cause, the group that filed the complaint.

But Bradley Smith, the Republican chairman of the Federal Election Commission from 2000 to 2005, was skeptical that the payment by Cohen could pose a campaign finance issue.

“You’d have to prove that it was a coordinated expenditure, and that the reason it was done was for the benefit of the campaign,” he said. If the payment was made to protect Trump’s brand or avoid personal embarrassment, he said, that would likely not be a campaign problem.

A lawyer for Clifford, Keith Davidson, has previously distributed statements on her behalf denying there was ever any affair.

In recent weeks the actress declined to elaborate when pressed on ABC’s “Jimmy Kimmel Live!”

Rodriguez said her client will soon announce how and when she will tell her story publicly.