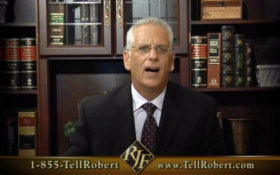 His son also shot and wounded the attorney’s longtime girlfriend before turning the gun on himself, a family spokesman said.

Hollywood police confirmed that officers responded to the Fort Lauderdale-area home and found two dead men and one wounded woman, but they didn’t immediately identify the shooter or victims, news outlets reported. The woman was taken to a nearby hospital in serious condition, police said.

Scott Mager, a family spokesperson, said during a news conference later Wednesday that Robert Fenstersheib was shot and killed by his son, Michael, who was battling mental health issues and addiction. Mager also identified the other victim as Robert Fenstersheib’s girlfriend.

Fenstersheib, a personal injury attorney, became known throughout South Florida from a series of “Tell Robert” commercials. According to his firm’s website, Fenstersheib had handled more than 30,000 cases over the past 40 years.

You can see one of his famous advertisements below: