Pope tells America to use wealth to help immigrants, climate - The Horn News 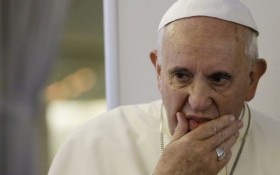 Pope Francis’ visit to America was supposed to be about promoting families. But in a speech before a joint session of Congress yesterday, he touched on many politically-charged squabbles that have existed among members of Congress and American citizens for years, frustrating some Roman Catholic conservatives.

Francis waded into bitter disputes while speaking to Congress, saying the nation should share more of its immense wealth with those less fortunate. He urged Congress and the nation to abolish the death penalty, to fight global warming, and embrace immigrants. Lawmakers gave ovations to the leader of the world’s Catholics despite obvious conservative disagreements over some of his pleas.

Besides his focus on climate change and immigration, he denounced arms sales and seemed to allude approvingly to the Iran nuclear deal and recent actions by President Barack Obama’s administration to open relations with Cuba, done with his urging.

Republicans heard something to like in his references to the sanctity of life and family relations, reminders that even the more open Catholic Church over which Francis presides still condemns abortion and gay marriage.

His mention of climate change drew standing cheers from Democrats while Republicans stood to applaud the reference to opposing abortion. Republicans in particular also loudly applauded as he asserted the importance of family life and bemoaned that “fundamental relationships are being called into question as is the very basis of marriage and the family.” The Catholic Church opposes gay marriage, recently legalized by the Supreme Court.

His visit hasn’t been all political shots, however. At an evening prayer service in St. Patrick’s Cathedral, he thanked American nuns for their strength and courage in a deeply meaningful acknowledgement of their service following a yearslong Vatican crackdown.

Friday, the pope will address world leaders at the United Nations, participate in an interfaith service at the Sept. 11 memorial and celebrate Mass at Madison Square Garden. He will visit a school in Harlem and take a drive through Central Park, part of a whirlwind tour of the Big Apple that got off to a quintessential welcome with a high school brass band serenading him with “New York, New York,” on the airport tarmac.

Francis wraps up his visit this weekend in Philadelphia, where he speaks in front of Independence Hall and celebrates Mass on the Benjamin Franklin Parkway to close out a big Catholic families rally.