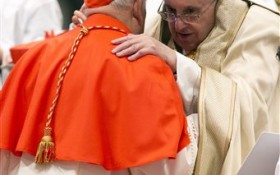 Pope Francis heads into the heart of Mexico’s drug-trafficking country Tuesday for meetings with young people, whom he is holding up as the hope for a better future for a country wracked by the violence and gang warfare of the drug trade.

Francis’ visit to Morelia, the capital of Michoacan state, a hotbed of narcotics production and smuggling, will also give him a chance to send a message about his vision for the future of the Mexican church.

Last year, Francis made a cardinal out of Morelia Archbishop Alberto Suarez Inda, one of several “peripheral” bishops elevated to the highest ranks of the church’s governance.

Like the pope, Suarez Inda has called for Mexico’s church leaders to put aside their comfortable lives and become pastors with the “smell of their sheep.” It’s a famous phrase of the pope’s about the need for bishops to accompany their flock closely through life’s ups and downs.

Since beginning his Mexico trip Friday night, Francis has repeatedly taken to task the Mexican church leadership, many of whom have been reluctant to criticize the wealthy and powerful elite to whom they have close ties.

On Saturday in Mexico City, he scolded what he called gossiping, career-minded and aloof clerics, and admonished them to stand by their flock and offer “prophetic courage” in facing down the drug trade. In an inscription in a seminary guestbook, he urged future priests to be pastors of God instead of “clerics of the state.”

The pope’s stop in Morelia signals that he fully backs Suarez Inda’s pastoral program and holds him up as a model for other clerics to emulate.

In 2013, at what was perhaps the height of the violence in Michoacan, Suarez Inda led eight other bishops in signing an unusually outspoken letter accusing government authorities of “complicity, forced or willing,” with criminal gangs. It urged priests to “do whatever is in your power” to help people in an atmosphere of kidnappings, killings and extortion and to “carry out concrete actions in favor of peace and reconciliation.”

Suarez Inda clearly backs Francis’ ideas about the role of clerics in contemporary Mexico, echoing the pope’s admonition that “pastors should not be bureaucrats and we bishops should not have the mentality or attitude of princes.”

The pope “shakes up the conscience of priests in order that we not be mediocre, installed priests who simply seek social promotion, but rather that we truly live our calling to serve the people with great generosity,” Suarez Inda told the Mexican newspaper El Universal last month.

Suarez Inda was also part of a group of clergy from Michoacan and neighboring Guerrero state who prepared a report on Mexico’s drug violence last year that he said left Francis “very shocked and impressed.”

Francis may outline more of his vision for the church during a Mass celebrated with clerics, seminarians and nuns at a stadium.

But the day’s highlight could come in his final event, a gathering of Mexican youth. Francis often speaks off the cuff when meeting with young people, and he will almost certainly touch on the drug problem.

Much of Michoacan is part of a region called Tierra Caliente, or the Hot Lands, known for both its blistering temperatures and brutal tactics by gangsters eager to control lucrative drug-production territory and smuggling routes.

By 2013, the pseudo-religious, evangelical-inspired Knights Templar cartel was widely kidnapping and extorting money and dominating the state’s economic and political scene so much that local farmers took up arms against them. But the uprising by the vigilante-style “self-defense” forces brought little peace to the state, with the groups fighting among themselves even as new criminal gangs sprang up or tried to muscle their way into Michoacan, a big source of methamphetamine production.

“I’m excited about the pope’s visit, but the reality is that people are afraid. Right now there is a festive atmosphere and a lot of police, but in the day-to-day it’s not that calm. Crime has risen,” said Yulisa Duran, an 18-year-old nursing student sitting with her boyfriend in Morelia’s main square.

“I lived in a tiny town that was very gentle, and then the (cartel) came in,” Duran added.

On Monday, Francis denounced centuries-old exploitation and exclusion of Mexico’s indigenous people in the southern state of Chiapas and said the world can learn from their traditions.

“Some have considered your values, culture and traditions to be inferior,” he said. “Others, intoxicated by power, money and market trends, have stolen your lands or contaminated them.”

He called for a collective “Forgive me.”

In San Cristobal de las Casas, Francis celebrated a Mass that featured readings in native Mayan languages. He also made a point of praying before the tomb of Bishop Samuel Ruiz, who ministered to Mexico’s poorest and supported the controversial practice of blending their indigenous culture into Catholic rituals.