Pope Francis' Philadelphia trip cost HOW MUCH!? - The Horn News 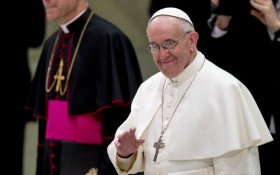 Here’s a breakdown of the numbers behind Pope Francis’ visit to Philadelphia, including the staggering cost to the World Meeting of Families:

— Attendance: Organizers were predicting more than 500,000 for Saturday’s concert celebration and more than 1 million for Sunday’s Mass, but official figures haven’t been released.

— Cost: $45 million was the fundraising goal for the event’s organizers at the Vatican-sponsored World Meeting of Families conference. Of that, $12 million will go to the city for policing, traffic and crowd control, fire and emergency medical response, emergency management, streets and sanitation. The state spent about $9 million in federal funding on National Guard personnel. The Secret Service didn’t break out its costs. The agency’s annual budget for National Special Security Events like this is $4.5 million.

— Subway home: 40,000 passengers rode SEPTA’s Broad Street line to South Philadelphia after Sunday’s Mass, compared to about 125,000 for all trips on the line on an average weekday.

— No driving or parking: 25 miles of highways closed in the Philadelphia area; vehicles restricted from entering a 4.7-square mile area of the city; 591 vehicles towed out of the vehicle-free zone.

— Food and drink: 69,000 meals served to first responders; 250,000 bottles of water given out to pilgrims by Philadelphia-area convenience store chain Wawa.

— Cheesesteaks eaten by Pope Francis: 0. Archbishop Chaput says the pontiff’s room was stocked with other Philadelphia treats, but it’s unclear if he ate them.

— Babies kissed: More than a dozen, including one dressed like Pope Francis.