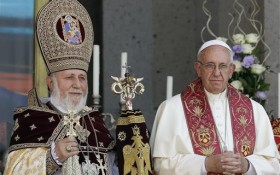 Pope Francis defended using the term “genocide” to describe the Ottoman-era slaughter of Armenians, saying Sunday that’s how he has always referred to the massacre, he didn’t mean anything offensive by it and that it would have been “very strange” to have avoided it.

Turkey accused Francis of adopting a “Crusades”-like mentality by terming the 1915 killings a “genocide” during his three-day visit to Armenia — a charge the Vatican strongly dismissed.

Asked Sunday en route home from Armenia why he decided to add “genocide” into his prepared remarks, Francis said it was simply the term that he had always used in Argentina, where he was close to the Armenian community.

“When we spoke of the Armenian extermination, the word we used was ‘genocide.’ I didn’t know any other,” he said. Only after arriving in Rome as pope did he learn of other phrases — the “Great Evil” or the “terrible tragedy” — and that “genocide” carried legal weight given Armenian claims for restitution.

He added: “I have never said it with an offensive spirit, but objectively.”

Francis wrapped up his trip Sunday with calls for closer ties with Armenia’s Oriental Orthodox church and a joint declaration with the Apostolic Church leader on the plight of Christians in the Mideast. He also visited a monastery near Armenia’s closed western border with Turkey, where he and the Armenian patriarch released two white doves of peace.

But it was Francis’ recognition on Day 1 that the 1915 slaughter by Ottoman Turks of an estimated 1.5 million Armenians constituted planned “genocide” that continued to reverberate.

Turkey issued a harsh rebuttal late Saturday, with Deputy Prime Minister Nurettin Canikli calling the comments untrue, “greatly unfortunate” and saying they bore the hallmarks of the “mentality of the Crusades.”

Turkey rejects the term genocide, saying the death toll cited by historians is inflated and that people died on both sides as the Ottoman Empire collapsed amid World War I. When Francis first used it last year, Turkey recalled its ambassador for 10 months and accused the pope of spreading lies.

On Sunday, Francis turned his attention to religious affairs, participating in an open-air liturgy on the grounds of the Armenian Apostolic Cathedral in Etchmiadzin, the seat of the Oriental Orthodox church here. The landlocked nation of 3 million was the first nation in the world to adopt Christianity as a state religion in 301.

Amid haunting chants, Francis processed up and down the central walkway of the Etchmiadzin complex alongside the patriarch, Catholicos Karekin II, both walking under a gold-brocaded canopy as incense furled around them. During the 2-hour service celebrated by Karekin, Francis stood to the side of the altar and offered a greeting calling for greater unity between the two churches.

“May an ardent desire for unity rise up in our hearts, a unity that must not be the submission of one to the other, or assimilation, but rather the acceptance of all the gifts that God has given to each,” he said. “Let us pay heed to the younger generation, who seek a future free of past divisions.”

The Armenian Apostolic church and a few other Oriental Orthodox churches split from the Catholic Church in the 5th century in a dispute over the divine and human natures of Jesus Christ. The division arose some six centuries before the Great Schism that split the rest of Orthodoxy from Rome.

While still divided over the primacy of the pope, the Apostolic and Catholic churches have friendly relations. Francis and his papal delegation stayed at the Etchmiadzin cathedral complex as guests of Karekin.

The two men expressed their joint concern for Islamic extremist attacks against Christians in the Middle East.

“The martyrs belong to all the churches and their suffering is an ‘ecumenism of blood’ which transcends the historical divisions between Christians, calling us all to promote the visible unity of Christ’s disciples,” the declaration read.

It repeated a line from a 2001 declaration penned by St. John Paul II and Karekin that the slaughter of Armenians was the “first genocide of the 20th century,” and hailed the progress made in warming relations.

After Sunday’s liturgy and a formal luncheon, Francis headed west toward Armenia’s border with Turkey to visit the Khor Virap monastery, one of the most sacred sites in Armenia. The monastery lies in the shadow of Mt. Ararat, where, according to legend, Noah landed his Ark after a great flood. He and Karekin released two white doves in a message of peace toward Turkey.

Turkey closed the border with Armenia in support for its ally and ethnic kin, Azerbaijan, after the Nagorno-Karabakh conflict erupted into a full-scale war in 1992. The blockade has worsened Armenia’s economic problems. Nagorno-Karabakh is officially part of Azerbaijan, but since a separatist war ended in 1994 it has been under the control of ethnic Armenian militia that Azerbaijan says include regular Armenian military.

Francis has said he would love to see the Turkish-Armenian border reopened, given his longstanding call for countries to build bridges, not walls.

The final declaration expressed hope that a peaceful resolution would be found to the Nagorno-Karabakh conflict.