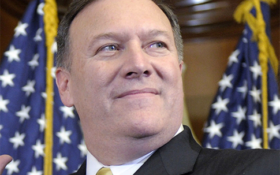 Secretary of State Mike Pompeo is laying out the Trump administration’s strategy for constraining Iran’s nuclear program and opposing its other behavior in the region following President Donald Trump’s withdrawal from the 2015 nuclear deal.

Pompeo will present the approach during a speech Monday at the conservative Heritage Foundation.

According to administration officials, the new strategy will place pressure on Iran to negotiate on “a new security architecture” beyond the nuclear program.

The speech comes a week after Trump announced he was pulling out of the deal struck by former President Barack Obama, Iran and world powers. European allies had pleaded with Trump not to scuttle that deal.

Pompeo is expected to call for those same allies and other nations to join the U.S. in ramping up pressure on Iran in hopes of securing what Trump has described as a “better deal.”