Pompeo: USA will “get our swagger back” - The Horn News 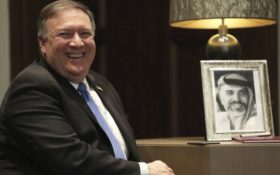 Mike Pompeo, the new secretary of state, has vowed to “deliver our nation” by helping the State Department “get our swagger back” under President Donald Trump.

In other words, no more apologizing for America!

Pompeo on Tuesday will appear for the first time at the State Department, following his confirmation last week. He plans to give a brief speech to the diplomatic corps, which is deeply dispirited following a tumultuous year under former Secretary of State Rex Tillerson.

Politico reports, “Within hours of being confirmed last week, Pompeo took along several journalists on a trip to Europe and the Middle East, answering their questions in public and private, and appearing Sunday on ABC News’ ‘This Week.’ He’s planning a town hall meeting with State Department staff soon. And he may even start tweeting.”

“It signals that, unlike Tillerson, Pompeo recognizes some of the basic things he needs to do to make the State Department relevant,” said Ilan Goldenberg, a former Obama-era State official now with the Center for a New American Security. “By itself, it won’t make Pompeo an effective secretary of state. But not doing these things really hurt Tillerson.”

Pompeo says he’s counting on the support and talent of American diplomats. He’s praising them for serving the United States “sometimes at great personal risk.”

“His background as a congressman is a great asset in his current position,” said Brett Schaefer, a foreign policy analyst with the conservative Heritage Foundation. “He has a great deal of experience in interacting with a broad number of people and doing so in a way that is designed to listen to their concerns and respond to them.”

Pompeo is also thanking diplomats’ families for their sacrifices and “contributions to our mission.”

During a news conference in Brussels, Pompeo explained that after meeting with U.S. diplomats in Belgian, he planned to make his department more relevant.

The diplomats, he said, “may have been demoralized, but they seemed in good spirits. They are hopeful that the State Department will get its swagger back.”