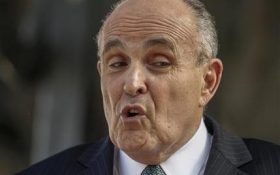 As President Donald Trump’s legal strategy to overturn the current results of the 2020 election continue, some supporters have been reassured by lawyer Rudy Giuliani’s recent tactics.

Others, though, have expressed frustration that Giuliani has seemingly pivoted from court battles to hearings in states where the vote has already been certified.

And with the Electoral College is just days away from officially locking Joe Biden in as the election winner, there’s little time left for Giuliani to turn things around. With the countdown to overturn the results rapidly fading, a small but growing number of Trump supporters on social media have asked for Giuliani to submit the evidence in the courtroom.

Even as Arizona’s Republican leaders certified the election results this week, Giuliani and his team held a meeting in a Phoenix hotel ballroom a few miles away to lay out claims of irregularities in the vote count in Arizona and elsewhere.

“The officials certifying have made no effort to find out the truth, which to me, gives the state Legislature the perfect reason to take over the conduct of this election because it’s being conducted irresponsibly and unfairly,” Giuliani said.

Why are they doing this again? They should present the evidence in the courtroom!

I actually watched the whole thing yesterday. It looks like they have TONS of evidence. What I can't understand is why they didn't present the evidence in their court cases! Feels like they saved it all to present after the case was dismissed. Why?!? I am so frustrated.

Trump himself has expressed frustration at Giuliani’s performance at times. The president reportedly called Giuliani and his team “fools that are making him look bad” last Monday.

Others, though, have praised Giuliani’s work.

What’s going on in Arizona is an absolute disgrace.

With just days before the Electoral College votes are locked into place, is Giuliani on the right path to overturn the results of the 2020 election?

Or should Trump replace him with a new lawyer… quickly?

Should Rudy Giuliani be replaced by Trump?