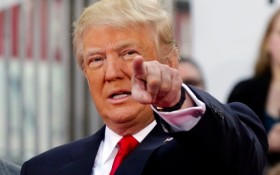 Donald Trump needs another big night tonight to stay on track to clinch the Republican presidential nomination by the end of the primaries. His political rivals, Texas Sen. Ted Cruz and Ohio Gov. John Kasich, say he’d get creamed in a general election — and a Trump nomination would all but guarantee a President Hillary Clinton

But a new George Washington University Battleground Poll says that’s increasingly untrue. According to The Hill, “Clinton, the front-runner for the Democratic presidential nomination, has 46 percent compared to Trump’s 43 percent, a more narrow margin than other polls have found.”

The poll, released Monday, has a margin of error of 3.1 percent, leaving Trump and Clinton in a virtual tie in a general election match-up. The results will strengthen Trump campaign’s argument heading into today’s voting that he’s the clear choice of Republican voters.

But Trump’s path to the nomination remains difficult, and by no means is it a sure thing. He heads into today’s contests with 845 delegates. That’s 392 short of the 1,237 needed to win the Republican nomination.

Trump’s rivals cannot win enough delegates in the campaign’s home stretch to clinch the nomination. Their only hope is to block him and force a contested national convention in July, with no candidate arriving with a majority.

Trump needs to win 58 percent of all remaining delegates to reach the magic number by the end of the primaries on June 7, and is poised to win five of the six states voting today.