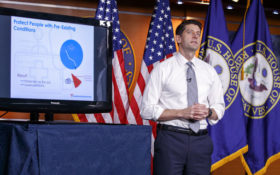 The House Energy and Commerce Committee cleared the GOP bill on a party-line vote of 31-23 Thursday — after more than 27 hours of debate. The Ways and Means Committee approved the legislation earlier in the day, and Ryan’s supporters are claiming fresh momentum despite cries of protest.

But it’s not Democrats leading the public resistance.

“This is the closest we will ever get to repealing and replacing Obamacare,” Ryan said at a recent press briefing.

1. House health-care bill can't pass Senate w/o major changes. To my friends in House: pause, start over. Get it right, don't get it fast.

Who do you support in this?

Vote in our urgent poll below and let The Horn News readers know where you stand. Are you with, or against, Speaker Paul Ryan?