Poll SHOCKER! Proof Trump WILL be re-elected - The Horn News 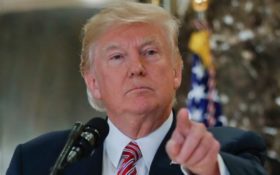 Donald Trump dropped a bombshell when he announced he will run for re-election almost three years before the election — but the voting group that will give him a second term will stun both liberals and the legacy media.

It’s been right there in the polls for everyone to see. But the media don’t report it. The Democrats are in denial. And the liberals hope they will just rub their eyes and it will all go away.

The secret to Trump’s victory could be just this simple: He’s more popular with minority voters than any Republican president has been in decades.

The surprising numbers are in two new polls that show Trump outshining Mitt Romney and the Bushes, and building an unstoppable coalition before the 2020 election.

CBS finds 14% of black voters told liberal pollsters something they thought they’d never hear: “I am a Trump supporter.”

While not huge in total, it’s the proportions that matter. That number means Trump has already doubled his support among black voters since the 2016 election.

But even that massive success may be selling Trump short. According to Survey Monkey, almost one-in-four black men say they support President Trump.

That’s three-times more than voted for him in 2016… when he already won 25% more black votes than Romney and Paul Ryan did four years earlier.

Donald Trump’s popularity with black voters was big enough to rip the state of Florida away from Hillary Clinton and put it in his win column.

Moving toward 2020, Trump’s momentum is building – and it’s just the beginning.

Another 22% of black voters polled told CBS, “I am against Trump now, but could reconsider him if he does a good job.”

If Donald Trump wins 36% of the black vote, 2020 won’t be a landslide – it will be a bloodbath. The last Republican to come close to that level of popularity with black voters was Dwight Eisenhower in 1956.

Rich liberal politicians have played the race card for 60 years to keep African-Americans voting for Democrats. Trump’s breakout approval ratings show it’s not working anymore. The race card is maxed out – and not just for black voters.

In a twist that will take the media’s breath away, Trump’s approval rating with Hispanic men has only climbed since he took office.

This is the group Trump is supposed to “hate” the most – and they love him more every day.

The numbers are undeniable. Even though it has a silly name, Survey Monkey is one of the most comprehensive polls out there. It based its results on 605,172 interviews.

The Fake News media have thrown everything at Donald Trump to make him look like the American version of Hitler. But the voters are seeing through it, and it’s not hard to figure out why.

Black unemployment is lower than ever – a fact Democrats refused to applaud that at the State of the Union.

Unemployment for Black Americans is the lowest ever recorded. Trump approval ratings with Black Americans has doubled. Thank you, and it will get even (much) better! @FoxNews

The Trump economy is so good that people who had to sit on the couch during the Obama years are finally able to get a job. The New York Times reported that number of “prime-age workers — those ages 25 to 54” who were employed “hit a seven-year high in December.”

And workers are seeing more money in their paychecks – and not just from bonuses and the tax cut. Wages are climbing faster than any time since 2009 – basically, faster than the entire Obama presidency.

Every worker benefits when wages rise. Black and Hispanic working men are all grateful for the red-hot economic growth.

Trump’s also winning minority voters’ respect by telling it like it is and keeping his campaign promises. Poll after poll shows that blacks support closing the border, because they – and immigrants who are here legally – have to compete with low-skill, low-wage illegal immigrants.

That’s been driving wages down for decades – and it’s coming to a crashing halt.

Sponsored: Did you drink THIS today?

Trump’s toughness – and his decency – has won him the support of distinguished black leaders like Martin Luther King Jr.’s niece, Alveda King. She told Fox News, “I consider President Trump to be a leader” who sees all races as equal.

Who are you gunna believe the lily white #MorningJoe panel assembled to call Trump a RACIST or @AlvedaCKing: "I consider President Trump to be a leader" pic.twitter.com/9sAtiY2a2D

Unlike Barack Obama, when Donald Trump looks at people, he doesn’t see races. He doesn’t see voting blocs to be won.

Instead, he sees Americans who deserve all the help and support that the government can give them. Isn’t that what everybody should want from aleader?