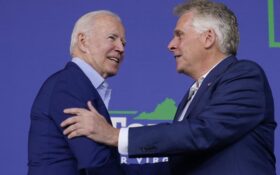 Virginia is preparing to elect a new governor, and the Democrats are panicking.

The race has become a dead heat, according to a new poll from Emerson College/Nexstar Media. Democrat Terry McAuliffe is polling at 49 percent, and Republican Glenn Youngkin is polling at 48 percent.

McAuliffe was enjoying a four-point lead over Youngkin in September, according to Emerson’s previous poll. McAuliffe was polling at 49 percent last month, and Youngkin was at 45 percent.

Either Youngkin has won four points’ worth of undecided voters since last month, or he’s peeled votes away from the third-party candidates.

Either way, Youngkin has inspired pessimism in the Democrats.

He comes from the private sector, and he served as the CEO of a financial firm.

Meanwhile, McAuliffe has amassed a record as a career politician. He worked as co-chair of the reelection campaign for former President Bill Clinton. Then he chaired both the Democratic National Committee and the first presidential campaign for former State Secretary Hillary Clinton.

He’s even been governor of Virginia before.

McAuliffe won the governor’s race in 2013. He received 47.8 percent of the vote, while the Republican received 45.2 percent.

In 2013, McAuliffe may have benefitted from a Libertarian candidate who received 6.5 percent of the vote and, presumably, peeled some votes away from the Republican.

This time, the Libertarians aren’t running anybody. However, the hard-left Liberation Party is running a candidate this year, much to McAuliffe’s chagrin.

McAuliffe has run into more hurdles this year than in 2013. Back then, he ran unopposed for the Democratic nomination. This year, he ran against four other Democrats.

Virginia holds its state-level elections in odd-numbered years, presumably to lessen the influence of the federal government. After all, more than a third of Virginia’s population lives within the metro area of Washington, D.C.

Like the 2013 election, this year’s election has no incumbent. Virginia forbids its governors from serving more than one term in a row, the only state to do so.

Every governor since 1975 has served only one term. So, the historical odds have been stacked against McAuliffe.

McAuliffe is also underperforming the Democratic candidate from the previous election. In 2017, Democrat Ralph Northam won the governor’s race with 53.9 percent of the vote.

The rest of the polling data looks bleak for McAuliffe… and other Democrats.

President Joe Biden won Virginia by 10 points last year, and he endorsed McAuliffe at a campaign event in July.

McAuliffe himself has admitted Biden’s lack of popularity.

“As you know, the president is unpopular today, unfortunately, here in Virginia,” he acknowledged in a video obtained by the Republican National Committee.

The polling took place between Friday and Sunday. The pollsters communicated with respondents via the internet, text messaging, landline phone calls. They asked 620 likely voters, “If this election for governor were held today, for whom would you cast your vote?”

For the aggregate poll, the pollsters calculated the margin of error at 3.9 percent.