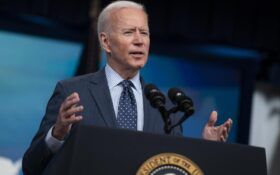 A controversial pollster has identified four bellwether districts for the House… and they’re unlikely.

One of them contains President Joe Biden’s hometown: Scranton, Pennsylvania.

The Horn News has previously reported that “Scranton Joe” is polling especially low in Scranton.

According to this new poll, other Democrats are hardly faring better.

The Pennsylvania district leans five points toward the Republicans, according to the Cook Partisan Voting Index.

The district voted for former President Donald Trump in 2020 but also re-elected its incumbent House Democrat that same year, one of only seven districts to do so.

Matt Cartwright — the House Democrat — is facing a tough reelection. Cartright won his first House election in 2018, as part of the historic freshman class including New York Rep. Alexandria Ocasio-Cortez.

Like Ocasio-Cortez, Cartwright joined the House Progressive Caucus in Congress.

At first glance, Cartwright appears to be coasting. He’s polling five to seven points ahead of his Republican opponent, depending on the order of the questions asked.

However, the poll looks more complicated after some scrutiny.

The pollsters estimated a 5.8 percent margin of error, relatively high.

Plus, six to nine percent of likely voters remain undecided… and among undecided voters, Cartwright is trailing the Republican by three points.

Most importantly, the poll respondents leaned blue. 47 percent voted for Biden in 2020, compared to only 44 percent for Trump.

In Biden’s home district, the House Democrat is finding himself in a race too close for comfort.

The poll took place between Oct. 19 and 21. Pollsters at Siena College surveyed about 400 voters in each district over the phone.

Liberals have criticized Siena’s past polls for their small sample size and their low rate of response. “It wasn’t even that big a sample; so I dismiss that,” House Speaker Nancy Pelosi said of a previous poll by the same pollster.

Read more: ‘Scranton Joe’ rejected by his own hometown