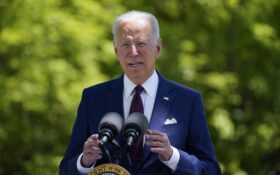 President Joe Biden has presided over a surge in the delta variant, a chaotic withdrawal from Afghanistan, rising inflation, and a humanitarian crisis at the southern border.

On Monday The Hill obtained new data from Harvard CAPS/Harris Poll, and the data show Biden’s favorability ratings in a statistical tie with Trump’s.

51 percent of respondents named Trump as the better president.

In addition to the favorability ratings, Biden’s approval rating has also sunk underwater, down 14 points in four months.

48 percent approved of Biden’s presidency. In June, that number was 62 percent.

The Hill interviewed the poll’s co-director, Mark Penn. He noted, “The mounting issues on all fronts have led to the surprise conclusion that Trump is now seen as good a president as Biden, suggesting the honeymoon is being replaced now with buyer’s remorse.”

“People see Pence as a better VP by 10 points and overwhelmingly see Pompeo as far better than Blinken, who has been out front on Afghanistan,” Penn said.

Some Republicans have been celebrating this polling data, and they have become optimistic about Trump’s electoral prospects in 2024. 58 percent of Republicans would vote for Trump in the 2024 Republican primaries, according to the same poll. Some of them see Trump as the best chance to unseat Biden.

“Since Trump lost the popular vote by 5 points, Trump getting 51 percent as a better president is actually an improvement from Election Day,” Penn said.

However, it’s not a good idea to read so much into a politician’s favorability ratings.

Throughout the 2020 primaries, Bernie Sanders always ranked as the most favored Democratic candidate, FiveThirtyEight reported after its multiple polls. Meanwhile, Biden’s favorability ratings went down with each successive poll of primary voters.

Plus, the poll’s methodology isn’t publicly available yet. The poll was shared exclusively with The Hill, and The Hill has published only part of it.

The Hill assured its readers that the pollsters had controlled for confounding variables, but The Hill didn’t say how the questions were worded.

Sometimes the precise wording of a question can lead respondents to a certain answer — and many pollsters skew liberal.

For example, 13 percent of respondents would vote for Florida Gov. Ron DeSantis in the Republican primaries. However, it remains unclear whether DeSantis’ low numbers are due to respondents’ lack of familiarity with him, their preferences for other candidates, or their genuine dislike for him.

In any case, The Hill will publish more of the polling data later in the week… and Biden has every reason to dread it.