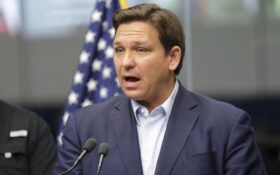 Republican leader Ron DeSantis’ popularity has grown nationwide, and fans of the Florida governor are going to love the latest polls that show DeSantis easily dispatching President Joe Biden in a hypothetical matchup in the 2024 presidential election.

But diehard supporters of former President Donald Trump’s 2024 run may not be so happy.

In a poll conducted by the conservative group Club for Growth, Trump trails Biden significantly in a hypothetical head-to-head rematch. On the other hand, DeSantis — despite lack of name recognition among independent voters — leads Biden.

The poll shows Trump losing to Biden 41-48% — an 8-percentage point disadvantage for the Republican that’s outside the poll’s 3-point error margin. But in a head-to-head matchup against DeSantis, Biden gets 42% of the theoretical vote compared to 45% for the Florida governor, which is essentially a statistical tie.

To test people’s knowledge of the candidates, WPA Intelligence used a relatively novel approach in its survey by showing voters a picture of each of the three politicians and then asking respondents to either type the name of the man from memory or click an option acknowledging they didn’t know who they were. Both Biden and Trump were known to 98% of the electorate each; but only 64% knew who DeSantis was.

Ahead of the 2024 Republican presidential primary, some top GOP candidates have started trying attack lines aimed at the Florida governor.

“I agree with a lot of those issues that Ron brings to the table, I think he’s right,” the New Hampshire governor continued. “But to necessarily punish private businesses because they don’t agree with the policy or whatever it might be, those types of culture wars pushing their way into the private sector, that’s definitely not, I don’t think, where we want to be as Americans.”

David McIntosh, the Club for Growth president, isn’t shying away. He told NBC News that DeSantis has a lot of room to grow with a still left until the first Republican presidential primary in Iowa.

“Of all the three candidates, DeSantis is the one who has room to grow,” McIntosh said.

“Yet he still has high favorable, he still beats Biden, whereas Trump loses to him. As more people start to recognize DeSantis … there’s a lot of upside for him to grow and get stronger,” he said.

DeSantis has even won the admiration of an unlikely figure: Former Florida Gov. Jeb Bush, an establishment leader.

“I will say that, overall, Gov. DeSantis has done a good job as governor,” Bush told the Associated Press recently. “Florida is on a roll.”