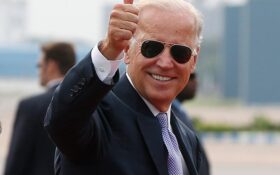 But the revolt has already begun in impatient blue states, including heavily Democratic New York, who made clear they aren’t following Biden’s leadership anymore.

It’s no wonder. Across the nation, the Democratic Party and the Biden administration have set up the 2022 midterms to be a sweeping Republican victory.

Distancing herself from the unpopular White House, New York Gov. Kathy Hochul announced that her state will end its COVID-19 mandate requiring face coverings in most indoor public settings — but will keep it for schools. Democratic-run Illinois announced the same.

Earlier this week, the blue states of New Jersey, Connecticut, and Delaware all disclosed plans to join the states without mask requirements for their schools, and Massachusetts will follow suit at the end of the month.

All are largely Democrat-controlled governments who have long promised to follow to “follow the science” but are now moving on.

Take a look at the polls below to see why —

The refrain “the internal polls must be bad” implies Democrats know something we don’t. Like what? The public polling is more than sufficient to induce an existential crisis. pic.twitter.com/iXoTU17MmA

Clearly feeling the pressure, the White House for the first time acknowledged movement in its planning, saying conversations have been underway privately to develop plans for guiding the country away from the emergency phase of the pandemic.

The White House offered no timetable for the review or an indication of what it will recommend. And some critics say that’s not good enough.

“The tragic thing is that these are governors that would probably have followed the White House’s guidance,” said Dr. Leana Wen, a former Baltimore health commissioner and current CNN contributor. “They wanted CDC input and asked for it, but without a clear timeline, at some point they had to decide that they couldn’t wait any more. The fault is not theirs, but the CDC’s and by extension, President Biden’s, which, with each passing day, is making itself less and less relevant.”

Asked whether Biden appears to be out of touch with the country, White House press secretary Jen Psaki defended him. “As a federal government we have the responsibility to rely on data, on science, on the medical experts,” she said.