[Poll] Re-open the economy? You decide - The Horn News 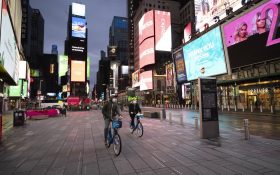 The number of Americans filing for unemployment benefits because of the coronavirus has soared past 30 million, worsening a crisis unmatched since the 1930s and turning up the pressure on political leaders to lift restrictions that are choking the economy.

Government figures released Thursday showed that 3.8 million laid-off workers applied for jobless benefits last week, raising the total to about 30.3 million in the six weeks since the outbreak took hold and forced the shutdown of factories and other businesses from coast to coast.

There was also bleak new data in Europe, where over 130,000 people with the virus have died so far.

Sponsored: Do THIS before bed – and wake up with COMFORTABLE hips

Figures from the 19 countries that use the euro showed that the European economy shrank a record 3.8% in the first quarter as lockdowns turned cities into ghost towns and plunged nations into recession. The drop was the biggest since eurozone statistics began in 1995.

At the same time, big job-protection programs are temporarily keeping millions of Europeans on payrolls, sparing them the record-setting flood of layoffs that is battering the U.S.

In the United States, economists have forecast that the unemployment rate for April could go as high as 20% — a figure not seen since the Depression, when the rate peaked at 25%.

This week, the government estimated that the economy shrank at a 4.8% annual rate in the first three months of this year, the sharpest quarterly drop since the 2008 financial crisis. And the current quarter is expected to be much worse, with a drop projected at 40%.

With signs that the outbreak may have plateaued in some places around the country, many governors have taken tentative steps to begin reopening their economies. But surveys show that a large majority of Americans remain wary of returning to shopping, traveling, and other normal economic activity.

Pushing to reopen the country, President Donald Trump was allowing federal social distancing guidelines to expire Thursday and was even planning to travel to Arizona next week.

Should Trump re-open the American economy — or do you want the White House to continue to act cautiously?