Poll: Hillary getting walloped in New Hampshire - The Horn News 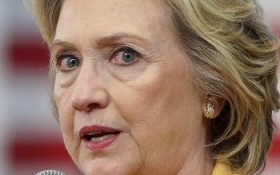 She’s raising and spending a fortune, and has been treating the presidential nomination process more like a coronation.

But a new poll is pointing to some potentially serious trouble ahead for Democratic front runner and former Secretary of State Hillary Clinton.

She may be well on her way to losing the pivotal New Hampshire primary by double digits.

According to a new poll from CNN, Vermont Senator Bernie Sanders has opened a 10-point lead over Clinton among likely New Hampshire primary voters. According to the poll, Sanders is drawing 50 percent of the support, compared to 40 percent for Clinton.

Former Maryland Governor Martin O’Malley is in distant third with 1 percent of the vote.

Sanders also has a much higher favorability rating among the left. Roughly 81 percent of registered Democrats view Sanders favorably, while just 68 percent hold the same opinion of Clinton according to the poll.

While the Clinton campaign continues to tout her lead over Sanders in several other states, it is rare for a candidate to lose in New Hampshire and eventually win a party nomination.

To try to revive her slumping campaign, Clinton is going back to an old standby – union support. Her campaign today announced they won the endorsement of a union representing federal workers, padding her labor advantage over Sanders.

The American Federation of Government Employees union said it was backing Clinton over the Vermont senator in the Democratic primaries. The union represents 670,000 workers in the federal government and District of Columbia government.

About 250,000 of the union’s membership works in the Department of Veterans Affairs system.

Clinton has won the endorsements of nearly 20 unions and labor alliances, representing more than 11 million workers, including large unions representing teachers and state government workers around the nation.

You can view the poll here.