Politician sentenced to prison for Nazi tattoo - The Horn News 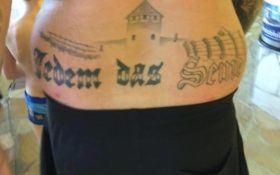 A German court has sentenced a far-right politician to eight months in prison for displaying a Nazi-style tattoo, stiffening the suspended term he originally received after prosecutors appealed.

The news agency dpa reported that the state court in Neuruppin, north of Berlin, on Monday upheld the defendant’s conviction for incitement.

The case against Marcel Zech involves a tattoo that appeared to combine an image of the Auschwitz death camp with the slogan from the Buchenwald concentration camp’s gate, “Jedem das Seine” — “to each his own.”

The 28-year-old admitted displaying the tattoo while visiting a swimming pool. In December, a district court in Oranienburg gave him a six-month suspended sentence.

Zech, a member of the far-right National Democratic Party, also appealed that verdict and had sought an acquittal.