Police warning: ISIS on the loose in Philadelphia - The Horn News 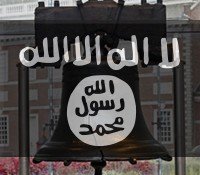 A man who swore allegiance to ISIS and ambushed a Philadelphia cop may be part of a cell of radical Muslims looking to plot more attacks.

That’s the warning that Philadelphia police are sounding after Edward Archer, 30, was charged with trying to assassinate Patrolman Jesse Hartnett last week.

Archer claims he was “following Allah” when he fired 13 shots at Hartnett late Thursday in a brutal attack. Harnett, who was hit three times, survived. But since the attack, more shocking information has been revealed about both Archer and his associates.

Police are investigating Archer’s overseas trips to Egypt and Saudi Arabia in 2011 and 2012, and information indicating that Archer had pledged allegiance to ISIS.

The police department said Sunday that they had received information from a tipster that Archer was a member of a radical group, and they’re currently hunting for three of Archer’s associates who remain at large.

“The threat to police is not over,” the department said in a published report.

Police say they are working with the FBI on the investigation. They have alerted all department employees and will continue to require officers to work with a partner until further notice.

Archer was charged Saturday with attempted murder, aggravated assault, assault of a law enforcement officer and several firearms crimes. He is being held without bail pending a Jan. 25 preliminary hearing.

Investigators said Archer told them he believed the police department defends laws that are contrary to Islam.