Police: Fire at LA church an act of arson - The Horn News 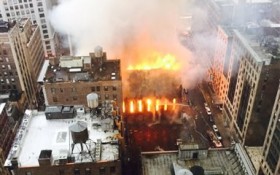 Officials say a fire at a small predominantly black church in Louisiana was caused by arson.

The Advocate reports the fire occurred at the New Life Bible Center in the part of the city known as Old Mandeville about 9 a.m. Monday.

The Louisiana State Fire Marshal’s chief deputy, Brant Thompson, says a passer-by noticed smoke engulfing the building and reported the fire. No injuries were reported, but Thompson says three people were sleeping inside. One person was awakened by a noise and alerted the others.

Officials say the church has reported the theft of altar money in the last two months.

Nothing was stolen in the fire, but investigators found signs of forced entry.

Thompson says investigators are reviewing video surveillance footage from nearby to identify a suspect.