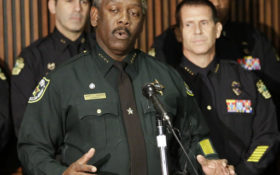 Police leading a massive manhunt for the suspected killer of an Orlando officer on Wednesday collected hundreds of tips and announced the arrests of two people who allegedly aided the fugitive, promising to reward anyone who turns him in, and punish anyone who helps him hide.

Court records show that Markeith Loyd’s niece, 27-year-old Lakensha Smith-Loyd, was arrested on an accessory charge Wednesday, a day after the fugitive’s supervisor at a fried chicken restaurant, Zarghee Mayan, was arrested on the same charge.

Mayan’s arrest affidavit said Smith-Loyd collected money from him to give to her uncle in the days after the slaying of his ex-girlfriend in mid-December.

Smith-Loyd’s affidavit says she contacted deputies after the ex-girlfriend’s murder and promised to help them find her uncle if they first told her whether a firearm had been recovered from the murder scene. Then she stopped cooperating even as she contacted others on her uncle’s behalf, the affidavit said.

Mayan is accused of supplying restaurant food to his former co-worker, driving him around and offering him money, despite knowing he was wanted in the slaying his pregnant ex-girlfriend, the affidavit said.

“Mayan did so with the intent that Markeith Demangzlo Loyd avoid or escape detection, arrest, trial or punishment,” the arrest affidavit said.

Mayan told authorities his most recent encounter with Loyd was last Saturday, two days before Master Sgt. Debra Clayton was fatally shot in a Wal-Mart parking lot. Mayan said he noticed that Loyd was armed and wearing body armor when they embraced, according to his arrest affidavit.

During another encounter, right after Loyd’s ex-girlfriend was killed in mid-December, Mayan said Loyd came into the restaurant with a gun, pointed at Mayan and said, “‘Drive me or I will kill you, I just did something real bad,'” the affidavit said.

Mayan said he drove Loyd to several locations, including the home of Loyd’s estranged wife, where Loyd told him to knock on the door. Mayan said he only walked to the door without knocking because he was afraid Lloyd would shoot her, according to the affidavit, which noted that Mayan told conflicting stories about his encounters with Loyd.

The 41-year-old ex-convict has been the focus of a massive manhunt involving hundreds of officers and deputies since Monday’s shooting. More than 500 tips have come in from the public, which authorities believe may be particularly important, since others may be helping him hide.

“If you know where he is at and you call us 3 o’clock in the morning, 3 o’clock in the afternoon, we will have people prepared to dispatch and go capture him,” said Barb Bergin, executive director of the local Crimeline.

Orlando Police Chief John Mina, meanwhile has warned that anyone helping Loyd “will be put behind bars and brought to justice as well.”

Mayan, 33, was arrested Tuesday by Orange County Sheriff’s Office deputies on a charge of accessory after the fact. Jail records show no bond had been set, and court records showed no name of a defense attorney listed for him.

Mina said federal, state and local authorities were taking part in the manhunt. Mina wouldn’t give details about search tactics but he said law enforcement agencies in Florida and around the nation are on alert.

“There are many things going on behind the scenes that our community is not aware of and that we are not at liberty to discuss,” Mina said.

After Clayton was shot, many of her colleagues immediately joined the pursuit; among them was a sheriff’s Deputy First Class Norman Lewis, who died when he was thrown from his motorcycle in an accident.

Funerals were planned for Lewis for Friday and Clayton for Saturday.