Planning your summer vacation? Here are attractions for the whole family... - The Horn News 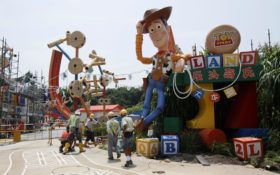 If you’re planning ahead to spring and summer trips, and your family loves theme parks, you’ll want to know about some of the new rides and attractions debuting in the new year.

One of the most anticipated openings for 2018 is Toy Story Land , expected to open early next summer at Walt Disney World Resort’s Hollywood Studios just outside Orlando, Florida.

Attractions and restaurants in the 11-acre (4.5-hectare) land will be themed on toys from the “Toy Story” movie series, like the Slinky Dog Dash roller coaster and Woody’s Lunch Box, a quick-service window serving soda floats and more. Another ride will be Alien Swirling Saucers, where aliens circling in flying saucers pull along rocket ships full of guests. An existing attraction, Toy Story Mania, will get a third track.

“We have booked hundreds of trips for early summer 2018 specifically for families that want to be one of the first to experience Toy Story Land,” said Greg Antonelle, an authorized Disney vacation planner at MickeyTravels .

Universal Orlando Resort opens a new attraction in the spring featuring characters, cars and music from the “Fast & Furious” movies. The Fast & Furious — Supercharged attraction will immerse guests in a story involving a high-speed race as they take a bus to an after-race party. Universal also is opening its sixth onsite hotel, Aventura, in August, with a 16-story glass tower, 600 guest rooms including 13 kids’ suites and the first rooftop bar and grill on Universal property.

Disney California Adventure Park in Anaheim, California, is transforming Paradise Pier into Pixar Pier for a summer opening . Rides will include the new Incredicoaster in one of four neighborhoods themed on Pixar stories and characters. The Incredicoaster neighborhood is inspired by “The Incredibles” film. The ride will include character moments, scenes, music and special effects connected to the movie “The Incredibles 2,” which opens in theaters in June.

The Time Traveler ride debuts next spring at Silver Dollar City in Branson, Missouri. Billed as the industry’s fastest, steepest and tallest spinning roller coaster, Time Traveler drops riders at a 90-degree vertical angle followed by three inversions at speeds up to around 50 mph (81 kph), all while spinning.

New in 2018 at SeaWorld in Orlando is Infinity Falls , a twisting raft ride. The ride starts with an elevator lift that launches eight passengers in a river and eventually sends them to a 40-feet (12-meter) drop, then on to an adventure through a rainforest with interactive stations that teach guests about conservation.

Battle For Eire Action VR Ride will make news for Busch Gardens Williamsburg in Virginia in the spring. It’s the park’s first motion-based theater simulator with state-of-the-art, 360-degree virtual reality headsets. The attraction’s story line involves a fairy warrior named Addie taking guests on an adventure through her Irish homeland. The attraction is located in the park’s Ireland village.

SeaWorld San Diego’s new Electric Eel will be the tallest and fastest roller coaster in San Diego when it debuts in summer 2018. The triple-launch coaster will thrust riders forward and backward, accelerate to more than 60 mph in seconds and go nearly 150 feet (46 meters) up, offering an upside-down view of Mission Bay.