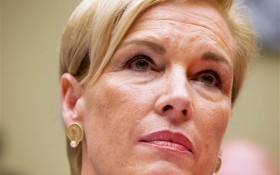 But the real fireworks came when Rep. Cynthia Lummins, R-WY, proved that Richards and Planned Parenthood have been misleading Americans for years about how important abortions are to the organization’s business.

But under examination, Richards admitted that abortions actually account for a staggering 86% of Planned Parenthood’s non-federal revenue.

The organization’s 3% claim is being called a ‘pathetic lie’ by multiple news sources, and the organization’s rationale was explained in a recent Op-Ed by National Review editor Rich Lowry:

Such cracked reasoning could be used to obscure the purpose of any organization. The sponsors of the New York City Marathon could count each small cup of water they hand out (some 2 million cups, compared with 45,000 runners) and say they are mainly in the hydration business.

Or Major League Baseball teams could say that they sell about 20 million hot dogs and play 2,430 games in a season, so baseball is only .012 percent of what they do.

In other words, while Planned Parenthood may provide dozens of services, abortion is where it makes its money.

Committee Chairman Jason Chaffetz, R-Utah, said the panel’s examination of tax and other documents also showed that the group has given $22 million over the past five years to its political affiliate, the Planned Parenthood Action Fund. He said it also spent more than $5 million on “exorbitant” travel in 2013 and paid Richards — who sat at the witness table in front of him — a massive annual salary of more than $500,000 a year.

According to Chaffetz, as well as reports from the Live Action News, Richard’s has gotten a raise every year since 2011, and her salary has ballooned by 40% in that time period.

Chaffetz said that the group’s infusion of federal money lets it use its non-federal dollars for politics.

“That has absolutely nothing to do with young women who need a breast exam,” said Chaffetz. “It’s a political organization.”

The video of some of Richards’ admissions is below: