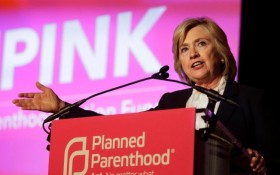 Planned Parenthood, the same organization that claims it would be broke without federal funding, has found several million dollars in the couch cushions to spend on Hillary Clinton’s campaign.

In a move that is unprecedented for America’s largest abortion provider, Planned Parenthood has announced that it is endorsing Hillary Clinton before the presidential primaries have even begun.

The controversial organization has also announced plans to spend millions to shake up the 2016 presidential election, seeking to ensure – in part – that its federal funding remains protected.

The endorsement by the group’s political arm marks Planned Parenthood’s first time wading into a presidential election so early, and it comes as Clinton remains locked in a tight contest with Bernie Sanders in Iowa and New Hampshire, home of the first two nominating contests.

Accepting the endorsement Sunday in New Hampshire, Clinton sought to energize her Democratic base with a passionate pledge to always protect abortion rights.

And she offered a nod to the competitive state of her own primary in the first voting states.

“I need your help, starting here in the New Hampshire primary and Iowa caucus,” she said. “We can win this election.”

Planned Parenthood has become a lightning rod in the 2016 campaign. Most Republican presidential candidates object to continued federal financing of the organization and a measure has passed the Republican-led House to stop the flow of money.

Planned Parenthood President Cecile Richards said the organization is making an early endorsement so that it can begin reminding voters about the Republican candidates’ “extreme” positions on abortion rights and women’s health. The group plans to spend at least $20 million on influencing the 2016 presidential campaign.