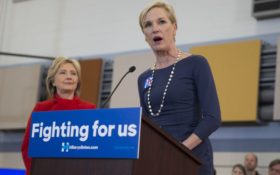 Cecile Richards, who led Planned Parenthood through 12 tumultuous years, has announced she’s quitting as its president.

In a statement Friday, Richards said she would remain engaged in political activism ahead of the November elections.

“There has never been a better moment to be an activist,” said Richards, who was a featured speaker in Las Vegas at one of last weekend’s largest women’s marches.

Richards, 60, is the daughter of former Texas Gov. Ann Richards. Before joining Planned Parenthood, she was a union organizer and deputy chief of staff to U.S. Rep. Nancy Pelosi, among other roles.

Reaction to Richards’ announcement reflected the divisive nature of the debate over Planned Parenthood’s role.

Pelosi, the House minority leader, hailed her as “a portrait of energy, intellect, and determination.”

Her legacy “is one of death and destruction,” said Kristin Hawkins, president of Students for Life of America. “She leaves broken lives in her wake.”

Many of the key battles for Richards and Planned Parenthood were waged in Congress, where Republicans repeatedly sought ways to cut off its federal funding. GOP lawmakers also organized multiple investigative committees after anti-abortion activists released secretly recorded videos in 2015 that they said showed Planned Parenthood employees illegally selling fetal tissue for profit.

Richards’ resignation precedes the scheduled publication of her memoir, “Make Trouble,” in April.