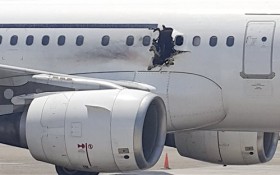 At least one of the men delivering the laptop was an airport employee, government spokesman Abdisalam Aato told The Associated Press.

The man who received the laptop is the suspected suicide bomber who was blown from the Daallo Airlines jet on Tuesday creating a gaping hole in the fuselage and forcing the plane to make an emergency landing back at the Mogadishu airport. It is believed the laptop-like device was the bomb that caused the explosion. The plane’s pilot said that if the explosion happened when the aircraft was at a higher altitude it could have caused the jet to crash.

“At least 20 people, including the two men in the CCTV footage who handed over the laptop to the suspected bomber, were arrested in connection with the explosion in the aircraft,” said spokesman Aato.

“It was a deliberate act of terrorism,” he said. “Investigations are still ongoing.” Somalia’s government has said it will tighten security at the airport to prevent other threats.

The CCTV video shows two men, one in a bright orange airport security vest, handing a laptop-like bag to a passenger waiting to board.

The video of the apparent security lapse at the airport fits with the description of lax security by the pilot of the plane.

“When we park (the plane) there, some 20 to 30 people come to the tarmac,” said Vodopivec, a veteran pilot who has made numerous flights to the airport. “No one has a badge or those yellow vests. They enter and leave the plane, and no one knows who is who … They can put anything inside when passengers leave the aircraft.”

“When we went past 10,000 feet, we switched off the fasten belts sign and the cabin crew started serving passengers,” Vodopivec said in an interview in Belgrade. “When we climbed past 11,000 feet, it exploded. At first, I thought it was a window breaking. However, we soon sensed the smell of the explosives when smoke came rushing into the cockpit.

“All lasted very shortly,” he said. “We immediately demanded an emergency return to the airport because that was the only solution. With a heavy heart, because there the security is minimal and we had to remain there for a couple of days afterward.”

If the explosion happened at a higher altitude, the hole in the fuselage might have caused more severe structural damage, he said.

“If we were higher, the whole plane could have disintegrated after the explosion,” Vodopivec said.

Because the plane was at a lower altitude, he was able to land safely, he said. “The plane acted normally and we virtually returned normally. Engines and hydraulics worked normally.”

The explosion killed one passenger, Abdullahi Abdisalam Borle, according to Somali officials who did not give further details. A man’s body was found in the town of Balad, 30 kilometers (about 18 miles) north of Mogadishu, according to police who said he might have been blown from the plane.

Borle is suspected to have been the suicide bomber, the AP was told by a senior Somali civil aviation official, who insisted on anonymity because he wasn’t authorized to speak to the media.

Somalia faces an insurgency from the Islamic extremist group al-Shabab, which has carried out deadly attacks in Somalia and neighboring countries.

Daallo Airlines, which is based in Dubai, has temporarily suspended its operations in Somalia’s capital following the incident but hopes to restart them soon, said Mohammed Ibrahim Yassin, the airline’s chief executive.

Vodopivec also highlighted additional security concerns in the Somali capital, including some planes that are struck by gunfire on approach to the airport.

“You can land at the airport only from the seaside,” he said. “On the other side of the runway is the city. Bigger planes don’t land over the city because of security concerns. Some planes landed with bullet holes in their fuselage.”