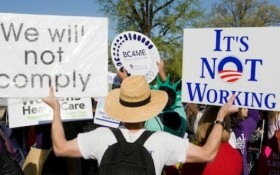 The U.S. House of Representatives returns to session this week.

And its first scheduled order of business for the new year? Repealing Obamacare.

The House is expected to take up the measure, which also scraps Planned Parenthood funding, this week. The bill already passed the Senate under special rules protecting it from Democratic obstruction.

Despite dozens of past votes to repeal the health law in full or in part, Republicans never before have succeeded in sending a full repeal bill to the White House.

They insist that doing so will fulfill promises to their constituents while highlighting the clear choice facing voters in the November presidential election.

Every Republican presidential candidate has pledged to undo the health law. The Democrats running for president would keep it in place.

Obama will veto the health law repeal bill. But that’s the point for Republicans, who intend to schedule a veto override vote for Jan. 22, when anti-abortion activists hold their annual march in Washington to mark the anniversary of the Supreme Court decision in 1973 that legalized abortion.