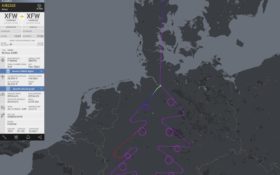 A pilot has traced a virtual Christmas tree over Germany on a test flight with an Airbus A380.

He said the idea for the Christmas tree pattern of the flight, which took off from and landed at the company’s plant in Hamburg, came from the pilot and engineers on the flight and it was carried out in cooperation with air traffic control.

The plane turned several corners and loops during its flight to produce a pattern in the shape of a tree complete with baubles.