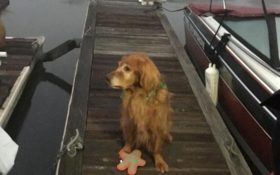 A brave 9-year-old pooch was just named the hometown hero in Pittsburgh, California for his very brave rescue of a senior citizen who fell into water at a marina.

On Wednesday morning, a man was out for his morning walk on the marina when he slipped and fell into the water. As the man struggled to stay above water Moe, the golden retriever, saw the accident unfold and began to bark for help.

Moe’s owner, John Newman, heard the barking and awoke to see what the fuss was all about — and quickly noticed the senior citizen drowning.

“I heard a human voice and I get my flashlight because it was still dark and I see [someone] over there in the water, saying ‘I’m stuck, I need help,’” Newman said.

Newman quickly picked the man out of the water and called for medical attention.

“He was soaking wet and probably had hypothermia. He was immobile,” Newman said.

The senior explained to Newman that he had fallen off of the docks and was unable to get himself back up. The water temperatures were in the low 40s and there was a blanket of fog.

“The man was able to be helped from the water and was extremely grateful to his new barking buddy!” the Pittsburgh Police Department explained on Facebook.

Later in the day, police officers visited Moe at his home. “Moe is about as sweet as can be and clearly loves the attention he is receiving for saving the life of an elderly gentleman,” the department posted to Facebook.

This lovable hometown hero turned hometown celebrity has stolen the hearts of officers in Pittsburgh, “We are proud to say you really are a hometown hero!” they wrote on Facebook.