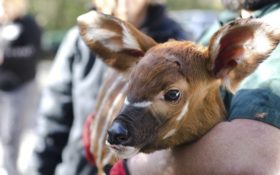 A bouncing baby bongo has been born in New Orleans.

The 46-pound female is from a critically endangered antelope subspecies. It’s the first calf conceived at the Species Survival Center created by the Audubon Nature Institute and San Diego Zoo Global.

And more baby antelope are on their way, including two or three more Eastern bongo, curator Michelle Hatwood said Monday.

That’s an excellent sign for a project to create large natural spaces where herds of antelope and giraffe can be comfortable and multiply.

In addition to the bongo, Hatwood said, three or four of the center’s sable antelope, two or three eland and a duiker (DIKE-er) also are probably pregnant. But the bongo are especially exciting, because — though zoos hold about 550 of the Eastern subspecies — only about 100 are left in the wild.

Hunting, diseases from domestic cattle and habitat loss from illegal logging are continuing to shrink those numbers, according to a news release from the Audubon Nature Institute, which also runs the Audubon Zoo in New Orleans.

The center’s male started acting “frisky” the week he was introduced to the center’s five females, Hatwood said in an interview.

She said that shows the animals felt at home almost as soon as they arrived, and even faster than zookeepers had expected. They’ll usually take a little time to settle down before they start breeding, Hatwood said.

“But it’s a big secluded area they’re in. They felt very comfortable and settled right in,” she said.

The center hasn’t made any tests to confirm pregnancy, but some of the sable, eland and bongo are beginning to show. “They’re getting bigger, getting wider. They’re eating a bit more,” she said.

A couple of giraffe could be due even sooner, though they arrived at the center pregnant. Giraffes can gestate for 14 to 16 months, which makes it hard to predict due dates, Hatwood said.

The unnamed bongo calf was born Dec. 11. For the first week or so, her mother (identified just as “3″) would leave her hidden, as deer do with fawns. But in the last day or two, Hatwood said, she’s been up and around, often with Kibo, the male.

“Our male has really taken to this little girl. He’ll go and find her and walk her around the woods,” she said. “It’s really cute. In a couple of weeks she’ll probably be with the herd full-time, bouncing around.”