Photographer's tri-pod mistaken as WHAT!? - The Horn News 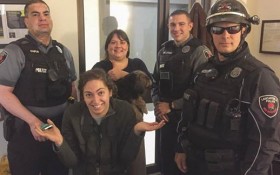 Police were called to a central Pennsylvania office building after someone mistakenly thought a photographer’s tripod was a gun.

LNP reports the incident happened about 11 a.m. Wednesday at the Griest Building in Lancaster.

The caller thought a machine gun was carried into the building, so police conducted a floor-by-floor search only to find the photographer and her tripod.

Employees at Industrial Resolution, a software firm in the building, took a photo of the responding officers and the photographer, who mugged for the camera. The company posted the image on its Facebook page.

Lancaster police Lt. Todd Umstead says the caller did the right thing that that police would “much rather respond to a call like this” and find nothing than not get a call when someone really has a gun.