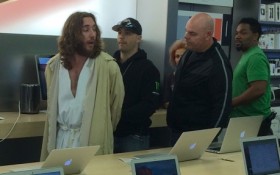 A man who calls himself “Philly Jesus” has a new cross to bear: He was arrested at a Philadelphia Apple store on a trespassing charge.

Philly Jesus’ real name is Michael Grant. He dresses like Jesus, carries a large cross, preaches on sidewalks and poses for photos. He also performs baptisms in city fountains.

Police say the Apple store’s manager told them Grant refused to leave Monday night despite being asked multiple times. They say his cross was blocking an aisle. He was handcuffed and arrested.

According to online court documents, Grant was charged with defiant trespassing and disorderly conduct. No lawyer information was listed. He was released after an arraignment early Tuesday.

Grant tweeted Tuesday that he was “free at last.”