Philly to be flooded with donkeys? - The Horn News 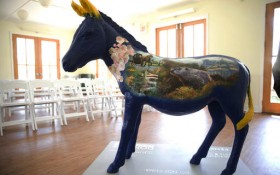 Donkeys will be dispatched around the city this summer ahead of the Democratic National Convention, the host committee announced Tuesday.

Fifty-seven fiberglass donkeys will be displayed at various sites and attractions starting July 1. The symbol of the Democratic Party will represent each U.S. state, each territory, Washington, D.C., and Democrats abroad.

The donkeys will be painted with iconic images from each location, chosen by each state’s delegates. The ideas were given to Philadelphia artists to create.

“Donkeys Around Town” is an effort to get residents in the convention spirit and encourage delegates and other visitors to explore the city. It’s the brainchild of former Gov. Ed Rendell, who’s the host committee chairman.

Rendell said he was inspired by a similar program in Erie a few years back that seemed to get tourists and locals excited to explore the city and the artworks.

The decorated donkeys will be found in places like the Betsy Ross House, the Philadelphia Art Museum and the city’s Clef Club of Jazz.

Pennsylvania’s donkey was the first to be unveiled Tuesday. Painted royal blue with yellow ears, it depicts Pennsylvania icons such as the Liberty Bell, Amish country and the state’s flag, bird and flower.

The committee is putting the donkeys only at locations with security on site.

The donkeys also will sport “Do Not Sit” signs, even though they each can hold up to 250 pounds, said Angela Val, of the DNC’s host committee. And their large metal bases make it tough to topple them.

The Mural Arts Program is prepared to quickly repair any vandalism.

Delegates can take their home states’ donkeys home or allow them to be auctioned, with proceeds going to the artists.