Peter King: I'll kill myself if Cruz is nominated - The Horn News 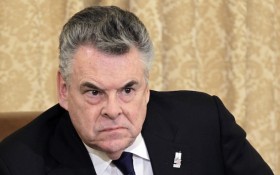 So much, he said he’d “take cyanide” if Cruz is elected.

“I hate Ted Cruz. I think I’ll take cyanide if he ever got the nomination,” King said in an appearance on MSNBC’s “Morning Joe.”

“Now, having said that, I think you’re going to see Donald Trump scoring a big victory tonight. I have not endorsed Donald Trump. In fact, I actually voted by absentee ballot for John Kasich.”

Previously, King had stated that New Yorkers needs to have “their head examined” if they back Cruz, who voted against Superstorm Sandy relief and medical benefits to emergency workers sickened at ground zero, in Tuesday’s primary.

Polls have Trump up huge in his native state, but Cruz isn’t punting New York, instead hoping to take advantage of the state’s rules to pick up scattered delegates across the state. In any congressional district in which a candidate doesn’t win 50 percent of the vote, the winner gets two delegates while the second-place finisher gets one.