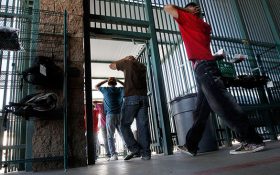 That’s how many questions moderator Lester Holt asked about illegal immigration at Monday’s presidential debate. For NBC News and the elite media, the issue is invisible, not important enough to be included in the public discussion.

Part of the reason is that our broken border is one of Republican presidential candidate Donald Trump’s most popular issues.

Another reason may be that the Obama administration has tried for years to cover up just how bad the problem has become.

In fact, an official from President Barack Obama’s administration has now been caught lying to Congress while under oath about the number of criminal aliens that had been deported, and how many crimes they committed against American citizens. In fact, she appears to have covered up more than 13,000 crimes, including murders, rapes, and assaults – and one conservative lawmaker is demanding answers, right now.

“Director Saldana testified that ICE released 30,558 criminal aliens in [fiscal year] 2014 and that those aliens had a combined total of 79,059 criminal convictions associated with them,” said Virginia Rep. Bob Goodlatte, a Republican.

Unfortunately, that number is a lie.

And it turns out Saldana may have knowingly committed perjury. ICE handed the correct numbers over to IRLI two weeks before she lied to Congress in April 2015. She has reported the same number of convictions to Congress several times, as recently as this April.

“ICE has now admitted that it knew of the additional 13,000 convictions at the time Director Saldana appeared before the committee” the first time, Rep. Goodlatte said last Thursday. “The failure to report this critical information raises serious questions about whether ICE intentionally distorted the true nature of these threats to Congress and the American public.”

Of course, the Obama administration’s top immigration official has every reason to mislead Congress. Was she trying to deflect blame? Make her boss look good? Convince Congress to hurry up and pass amnesty?

Goodlatte sent a letter to Saldana’s, Homeland Security Secretary Jeh Johnson, in June — but it predictably got no answers.

So, he called Saldana before the House Judiciary Committee last week – and she said it was an innocent bureaucratic snafu, because ICE can’t just “push a button” and get the correct information.

Should we expect anything else from the Obama administration?

ICE has released more than 86,000 convicted criminal aliens onto the streets over the last three years – including at least one who has a terror-related conviction.

That doesn’t count 370,000 criminals aliens that ICE never managed to arrest in the first place.

Saldana admits releasing 19,273 criminal illegal aliens convicted of more than 64,000 crimes in 2015 but she claims her hands were tied, because — she claims — a Supreme Court decision demands that the vast majority of them go free.

If an illegal alien is supposed to be deported, but his home country refuses to take him back, the Supreme Court says that the government must let him go, Saldana argued.

Again, not true. It turns out the Supreme Court ruling only accounts for a fraction of those releases – just over 2,000.