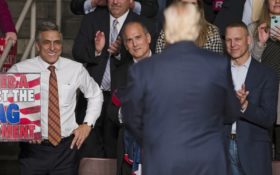 The Pennsylvania Supreme Court struck down the state’s widely criticized congressional map Monday, granting a major victory to Democrats who alleged the 18 districts were unconstitutionally gerrymandered to benefit Republicans and setting off a scramble to draw a new map.

In the Democratic-controlled court’s decision, the majority said the boundaries “clearly, plainly and palpably” violate the state’s constitution and blocked the boundaries from remaining in effect for the 2018 elections with just weeks until dozens of people file paperwork to run for Congress.

The justices gave the Republican-controlled Legislature until Feb. 9 to pass a replacement and Democratic Gov. Tom Wolf until Feb. 15 to submit it to the court. Otherwise, the justices said they will adopt a plan in an effort to keep the May 15 primary election on track.

The decision comes amid a national tide of gerrymandering cases, including some that have reached the U.S. Supreme Court.

Democrats cheered the decision to toss out a Republican-drawn map used in three general elections going back to 2012. The map, they say, gave Republicans crucial help in securing 13 of 18 seats in a state where registered Democratic voters outnumber Republicans 5 to 4.

“We won the whole thing,” said David Gersch of the Arnold & Porter Kaye Scholer law firm in Washington, D.C., which is helping represent the group of registered Democrats who filed the lawsuit last June.

The defendants — top Republican lawmakers — said they would ask the U.S. Supreme Court this week to step in and put the decision on hold. The state court’s decision lacks clarity, precedent and respect for the constitution and would introduce chaos into the state’s congressional races, they said.

The Senate’s top Republican lawyer, Drew Crompton, called the timeline to draw new districts “borderline unworkable,” but said Republicans will do everything they can to comply.

The decision has immediate implications for the 2018 election, meaning that 14 sitting members of Congress and dozens more people are planning to run in districts they may no longer live in. The deadline to file paperwork to run in primaries is March 6.

It also has implications for GOP control of Congress, since only Texas, California and Florida send more Republicans to the U.S. House than Pennsylvania.

They shifted whole counties and cities into different districts in an effort to protect a Republican advantage in the congressional delegation. They succeeded, as Republicans in the delegation grew from 12 to 13, even as Pennsylvania lost a seat to account for the state’s relatively slow population growth.

The Pennsylvania court’s six-paragraph order did not lay out the rationale for striking down the 2011 congressional map or which provisions of the constitution the justices believed it violated. That rationale could follow in the coming days.

The court’s five Democrats all agreed that the state’s congressional map is unconstitutional. Four of the five Democratic justices backed the decision to throw out the map immediately, while one Democrat, Justice Max Baer, warned that chaos would ensue and argued it would be better to put a new map in place in 2020.

The March 13 special election in a vacant southwestern Pennsylvania seat is unaffected by the order, the justices said.

The decision came as the U.S. Supreme Court is weighing whether redistricting can be so partisan that it violates the U.S. Constitution, in cases from Maryland and Wisconsin. The court also last week put on hold a lower court order in a gerrymandering case from North Carolina that gave lawmakers there two weeks to redraw the state’s congressional districts.

The nation’s high court has never struck down an electoral map as a partisan gerrymander. However, Monday’s decision in Pennsylvania could provide a new avenue to gerrymandering claims.

It is the first state court decision to throw out a congressional map because of partisan gerrymandering, said Michael Li, senior counsel at the Brennan Center for Justice at New York University.

Li said there isn’t a clear federal basis for the U.S. Supreme Court to step into the case, and that the state Supreme Court should have the final say in a case under state law.

“That’s a real long shot,” Li said, “but the stakes are high and it’s not surprising that (Republicans) would ask.”