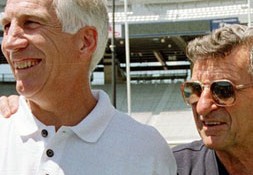 The shameful cover-up lasted 40 years. Now, the truth is finally coming out.

The Associated Press reports that Penn State’s legal settlements with Jerry Sandusky’s accusers cover alleged abuse dating to 1971, which was 40 years before his arrest, the university said Sunday, providing the first confirmation of the time frame of abuse claims that have led to big payouts.

The disclosure came as Penn State President Eric Barron decried newly revealed allegations that former football coach Joe Paterno was told in 1976 that Sandusky had sexually abused a child and that two assistant coaches witnessed either inappropriate or sexual contact in the late 1980s. Paterno, who died in 2012, had said the first time he had received a complaint against Sandusky was in 2001.

Barron said the accusations were unsubstantiated, and suggested that the university is being subjected unfairly to what he called rumor and innuendo.

Responding to questions about the president’s statement and claims against the school, university spokesman Lawrence Lokman told The Associated Press he could confirm that the earliest year of alleged abuse covered in Penn State’s settlements is 1971.

Sandusky graduated from Penn State in 1965 and returned as a full-time defensive coach in 1969.

The university has paid out more than $90 million to settle more than 30 civil claims involving Sandusky, now 72 and serving a lengthy prison sentence for the sexual abuse of 10 children. The trial involved only allegations dating as far back as the mid-1990s.

The settlements, including the one covering the 1971 allegation, were reached after Sandusky’s 2012 conviction. But few details have been provided on the payouts by either the school or lawyers for those who said Sandusky victimized them.

The allegations about Paterno and the assistant coaches were cited in a ruling last week by Philadelphia Judge Gary Glazer in litigation between an insurance company and Penn State over how much of the settlement costs the school must bear.

The insurers cited an allegation that a boy had told the longtime Penn State football coach in 1976 that he had been molested by Sandusky. The court document also cited statements, from those claiming they had been Sandusky’s victims, that two unidentified assistant coaches had said they witnessed inappropriate contact between Sandusky and children in the late 1980s.

Barron wrote the university community Sunday that he was “appalled by the rumor, innuendo and rush to judgment” following Glazer’s disclosure of some allegations made against Paterno and some of his assistants.

Barron said those allegations, and others raised in some news reports in recent days, are “unsubstantiated and unsupported by any evidence other than a claim by an alleged victim.”

“Coach Paterno is not alive to refute them. His family has denied them,” Barron said.

Some of the press reports, he said, “should be difficult for any reasonable person to believe.”

Barron said few crimes are as heinous as child sex assault, and the university is committed to prevention, treatment and education.

But he said he had “had enough of the continued trial of the institution in various media.”

Sue Paterno, who has defended her husband’s legacy and said the family had no knowledge of new claims, also called for an end to what she called “this endless process of character assassination by accusation.”

Lokman declined to answer questions about what steps the university took to verify abuse claims during the settlement process, or about what it had done to investigate the new allegations that Paterno and members of his coaching staff knew about Sandusky’s abuse decades before his 2011 arrest.

The university hired settlement experts Kenneth Feinberg and Michael Rozen to handle the claims. Feinberg declined comment. Rozen did not respond to an email from the AP.

In 2001, Paterno told high-ranking university officials one of his assistant coaches reported seeing Sandusky acting inappropriately with a child in a team shower. In 2011, Paterno told a grand jury he did not know of any other incidents involving Sandusky, who retired from Penn State in 1999.

Paterno was fired following Sandusky’s November 2011 arrest and died of lung cancer in January 2012. He was not charged with any crime, and his family is pursuing a lawsuit against the NCAA for commercial disparagement.

Three university officials, including former President Graham Spanier, await trial on criminal charges for their handling of the Sandusky scandal.