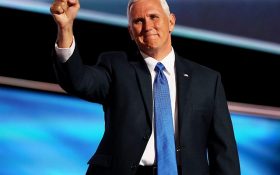 Vice President Mike Pence will visit Egypt, Jordan and Israel this month after postponing a trip to the Middle East in December following President Donald Trump’s decision to recognize Jerusalem as Israel’s capital.

The White House announced Monday that Pence will travel to the region Jan. 19-23, starting with a meeting in Cairo with Egyptian President Abdel-Fattah el-Sissi. Pence will also confer with King Abdullah II of Jordan and then hold two days of meetings and events in Israel.

Pence’s agenda in Israel includes meetings with Prime Minister Benjamin Netanyahu and President Reuven Rivlin, an address to the Knesset and visits to the Western Wall and the Yad Vashem Holocaust memorial.

Pence postponed his visit to Israel and Egypt in mid-December because of a Senate vote on Trump’s tax overhaul. But Pence’s trip to the Middle East, his first as vice president, will be carefully watched following Trump’s decision on Israel’s capital, which prompted Palestinian leaders to cancel planned meetings with the vice president.

Alyssa Farah, a Pence spokeswoman, said Pence was traveling to the Middle East at Trump’s direction “to reaffirm our commitment to work with the U.S.’s allies in the region to defeat radicalism that threatens future generations.” Farah said Pence was “looking forward to meeting with the leaders of Egypt, Jordan, and Israel to discuss ways to work together to fight terrorism and improve our national security.”

Pence is not expected to meet with the Palestinians, who have sought to make Israel-annexed east Jerusalem their capital.

Before Trump’s announcement, Palestinian President Mahmoud Abbas had planned to meet with Pence in the biblical town of Bethlehem but pulled out of the meeting in protest. The White House decision on Jerusalem also prompted leading Muslim and Christian clerics in Egypt to refuse to meet with the vice president in Cairo. Pence is only expected to meet with el-Sissi, a leading Trump ally, while in Egypt.

The status of Jerusalem has long been a central issue in the decadeslong Israeli-Palestinian conflict. Trump’s announcement in early December declaring Jerusalem to be Israel’s capital along with U.S. plans to move the U.S. embassy to Jerusalem from Tel Aviv shook up decades of U.S. foreign policy ahead of Pence’s planned visit.