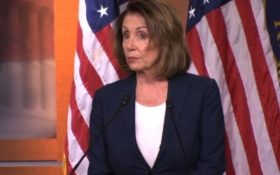 In Washington, Democrats are feeling a growing sense of doom, which has led to a wave of retirements in the House. Politicians are looking to quit before being fired by voters.

And there are rumblings that one of the biggest names in D.C. politics could soon join them: House Speaker Nancy Pelosi (D-Calif.).

Pelosi will turn 82 before the next election, when Republicans are expected to regain control over the House of Representatives.

But rather than hand over the gavel to the person most likely to become speaker, current House Minority Leader Kevin McCarthy (R-Calif.), she could skip town in retirement instead.

McCarthy hinted at Pelosi’s plans during a speech on the House floor earlier the month.

“I don’t know what plans Speaker Pelosi has,” McCarthy said. “I know she’s been to Europe three times in the last three months.”

He also noted that Pelosi seems obsessed with stamping her name onto a career-defining bill.

“I don’t know if she plans on staying longer. I know in her press conference that she said this will be the culmination of her career,” he said, referring to the massive spending bill that Democrats are trying to cram through the House before next year’s election.

“Maybe that’s why she’s pushing so hard for people to vote on a bill that costs $4 trillion that breaks the promises of President Biden before anybody could actually read it or analyze it,” he said, adding: “I just think that’s wrong.”

Pelosi herself has denied plans to quit.

She was asked her opinion on the word “retirement” during an MSNBC interview earlier this year. She said, “What’s that?”

But she’s also been hinting at it for a while.

Pelosi won two very contentious elections for House speaker in 2018 and 2020, when some congressmembers from competitive districts tried to push for someone younger and less controversial.

Part of her victory was due to a deal she made with the young upstarts of the party: She promised in 2018 that she would serve no more than two terms as speaker – meaning that even if the Democrats did retain control of the House after next year’s midterms, she’d be out as speaker.

She confirmed that intention earlier this year.

“I don’t want to undermine any leverage I may have, but I made the statement,” Pelosi said last year.

And, as McCarthy noted, she has been increasingly reflective about her legacy.

“I just told members of my leadership that the reconciliation bill was a culmination of my service in Congress because it was about the children,” she said in September.

“I sat up when Nancy Pelosi said the reconciliation bill was the ‘culmination’ of her congressional career,” said Susan Page, Washington bureau chief of USA Today and author of the biography Madam Speaker: Nancy Pelosi and the Lessons of Power, during an interview with the Guardian.

“Nearly everybody assumes this is her last term. But that was the first time I had heard her speak publicly in such a valedictory way,” she added. “Muscling through the agenda of another Democratic president, and a measure with such sweeping consequences, would cap her considerable legacy.”

“She wants to go out on top of her game. Nothing more, nothing less,” Jim Manley, a former adviser to retired Senate Majority Leader Harry Reid (D-Nev.), told the newspaper. “She’s not going to be driven out of the House on a note of failure. She only will go out on her own terms, and for her, that’s always winning.”

Winning for her, as McCarthy noted, could come with a huge cost as Americans are stuck with the $4 trillion bill while she retires comfortably to Europe.