Nancy Pelosi hints at retirement before midterms - The Horn News 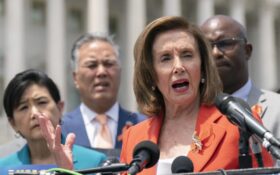 House Speaker Nancy Pelosi has been silent since the brutal attack on her 82-year-old husband, cutting short her campaign appearances until speaking to CNN on Monday.

And during the interview, Pelosi dropped a hint that she’s considering retirement soon.

Pelosi’s voice cracked with emotion and she acknowledged she was “close to tears” as she described the trauma of the attack on her 82-year-old husband.

She also dropped a hint about her future, and said Monday the brutal attack on her husband has impacted her decision on whether to remain in Congress after the midterm election.

Asked directly about her future, Pelosi said that the attack on her husband had impacted her thinking.

“I have to say my decision will be affected about what happened in the last week or two,” Pelosi said on CNN.

However, Pelosi also expressed a desire to send a “message” to political rivals.

“There has to be some message to the Republicans to stop to stop the disinformation,” she said. “We want the country to heal.”

To send this message, Pelosi may retire to become a fundraiser for Democrats and present herself to the media as an elder stateswoman. The late Senate Democrat Leader Harry Reid attracted significant media attention for coming out of retirement to make public statements.

Pelosi has previously committed to forfeiting her gavel by 2023.

After the 2018 elections, Pelosi agreed to limit her speakership to four years. “I am comfortable with the proposal and it is my intention to abide by it whether it passes or not,” she said in a statement at the time.

Despite her hints, Pelosi is still running for re-election to the House on Tuesday, and she will likely win another two-year term.

If Pelosi honors the proposal to step down as Democratic leader, she’ll likely become a congressional backbencher next year, rather than a House speaker or a House minority leader.

In October 2021, Pelosi named her family as the determining factor in her career decisions. “Why would I tell you that now?” Pelosi told a reporter asking about retirement. “Probably I would have that conversation with my family first, if you don’t mind.”

Pelosi talked to CNN about what it was like to learn that her husband had been brutally assaulted. The full interview will air later tonight but here's a clip. pic.twitter.com/K3kPy1E9tS

The Pelosi interview comes on the eve of elections as the Democrats are struggling against a surge of Republican enthusiasm to keep control of Congress. The House speaker offered some graphic details about her husband’s condition.

Pelosi’s husband, Paul, was reportedly bludgeoned 11 days before the election by an intruder named David DePape. Authorities said DePape broke into the family’s San Francisco and was looking for the speaker before striking him in the head with a hammer at least once.

Paul Pelosi suffered a fractured skull and other injuries in what authorities said was an intentional political attack.

Lawmakers have been voicing concerns about threats of violence. On Sunday, Arizona Republican Kari Lake — the leading candidate for governor — reportedly received a suspicious envelope full of white powder at her office. And House Minority Leader Steve Scalise, R-L.A., was shot multiple times by an extremist in 2017.

Members of both parties have wished Pelosi a speedy recovery.

“For me this is the hard part because Paul was not the target, and he’s the one paying the price,” Pelosi said.

Pelosi said the hammer hit her husband in two places, but did not pierce his brain. Pelosi said his recovery was “on a good path” but she acknowledged “it’s a long haul.”

DePape, 42, is being held without bail in San Francisco after entering a not guilty plea to attempted murder and other charges in San Francisco. He also faces federal charges of attempted kidnapping of an elected official.