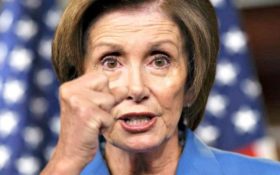 The stunning revelation comes at a chaotic time for Democrats: Special counsel Robert Mueller’s report was a momentum-killing loss in their crusade against Trump, and critics say party leadership is lost about what to do next.

So, she’s shifting her focus toward voters.

Democrats believe that if they simply win the 2020 presidential election, they could exact revenge on Trump.

“My takeaway is that there is a very real prospect that on the day Donald Trump leaves office, the Justice Department may indict him,” Rep. Adam Schiff, D-Calif. claimed recently.

But that means Democrats don’t actually care about doing what’s best for America. Pelosi and her pals only care about getting back in power.

And regular Americans are fed up.

The Horn News reported on Wednesday that 54 percent of voters are certain that Trump is going to be re-elected, due to his success as commander-in-chief.

Which means Pelosi and the liberals are stuck waiting around for a miracle — and this rate, with their candidates, that wait is going to last at least another six years.