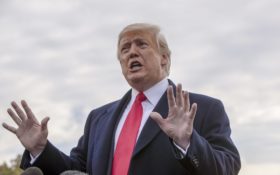 President Donald Trump just got news so good that even his biggest haters can’t deny it.

A new SSRS poll shows that an overwhelming amount of Americans — independent of party loyalties — believe that Trump will secure a repeat presidential win in 2020, according to CNN.

54 percent of people think he’s got the victory in the bag in the next election. Just 41 percent disagree — a very critical number that may very well define Trump’s presidency.

Ever since Trump threw his hat into the 2016 race, the mainstream media has been in full attack mode. If the liberal media was to be believed, zero people would vote for Trump.

The 2016 election proved that was a lie.

Now, even CNN is admitting that Trump is scoring higher numbers than Obama did at this same time in his tenure. Simply put, more Americans believe in Trump’s ability to win a second term than they did Obama back in 2011 (which came at the height of his presidency, just after Osama bin Laden was killed).

Considering the deck was stacked unfairly against Trump before he even began to lead the country, this is a surprising admission from the media.

Sponsored: Do THIS tonight and fall asleep in6 minutes

The economy is undoubtedly helped boost the Trump presidency. As long as it’s growing, he’s likely to have the support of the American people.

Far fewer people are worried about foreign catastrophes, strikes or wars. Americans’ fears from both North Korea and Iran have vanished.

The percentages of Americans who believe North Korea, Iran, China, and Russia are a threat to their lives has plummeted.

Trump is the wild card in negotiation, no doubt… but he’s effectively keeping our nation’s enemies off balance.

And Americans are responding.