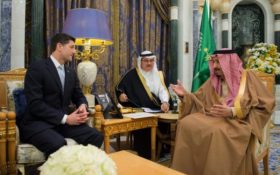 U.S. House Speaker Paul Ryan is leading a Congressional delegation to the Middle East, meeting on Wednesday with Saudi King Salman in the first regional stop for talks centered on security.

A statement by Ryan’s office said his meetings in the Middle East “will focus on regional stability, the campaign against ISIS and terrorism, and Iranian aggression.”

Saudi Arabia is a member of the U.S.-led coalition fighting the Islamic State group in Iraq and Syria. The kingdom and the U.S. also cooperate on intelligence sharing related to extremist groups like al-Qaida.

The kingdom’s relations with Washington were strained under President Barack Obama, whose administration helped negotiate a nuclear deal with Saudi rival, Iran.

Saudi-U.S. ties have since improved under President Donald Trump, whose first overseas visit as president was to Saudi Arabia in May. The two sides oversaw the signing of more than $100 billion in military sales to Saudi Arabia during that visit.

State-run Saudi media showed Ryan meeting with King Salman after he was received at the airport in Riyadh by the head of Saudi Arabia’s Shura Council, a consultative body that is appointed by the monarch. There is no elected legislative body in Saudi Arabia, an absolute monarchy where all major decisions rest with the king.

Ryan, who faces mid-term elections this year if he chooses to seek re-election to an 11th term, is scheduled to visit the United Arab Emirates on Thursday.