Paul Ryan is leaving Congress? Here's what he said... - The Horn News 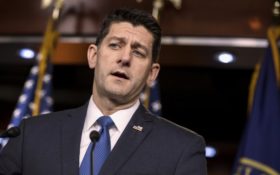 House Speaker Paul Ryan is denying reports that he plans to leave Congress after the Republicans’ treasured tax bill is approved.

Politico and The Huffington Post published stories speculating that Ryan would make this two-year Congress his last or even resign after lawmakers approve the $1.5 trillion tax bill, which could happen next week. Ryan took the job hesitantly in 2015 after John Boehner, R-Ohio, abruptly stepped aside as speaker under pressure from party conservatives, who remain a formidable and rebellious force.

“I’m not, no,” said Ryan, R-Wis., when a reporter asked him Thursday if he’d be quitting shortly.

White House press secretary Sarah Huckabee Sanders said President Donald Trump called Ryan and said he’d be unhappy if Ryan left Congress. “The speaker assured the president that those were not accurate reports and that they look forward to working together for a long time to come,” Sanders said.

Even so, several GOP operatives said privately that there have long been whispers that the 19-year House veteran wouldn’t keep the post for a long time and a departure wouldn’t be surprising. They spoke to The Associated Press on condition of anonymity to describe private conversations.

Ryan, his party’s 2012 vice presidential candidate, was initially reluctant to take the speaker’s post. It calls for long hours meeting with colleagues to line up votes or address other problems, and frequent fundraising trips for the party. Now 47, Ryan has three young children and initially said he was uninterested in being speaker, calling it a job for empty-nesters.

Ryan pushed a repeal of President Barack Obama’s health care law through the House in May after encountering resistance from both ends of the GOP’s political spectrum, only to see the effort run aground in the GOP-led Senate. Though Congress seems on the verge of passing the tax bill — the GOP’s first major legislative accomplishment this year — he faces negotiations with Democrats over spending and immigration likely to produce compromises that conservatives will angrily oppose.

During last year’s presidential campaign, he refused to campaign with Trump after the candidate was heard on a leaked 2005 “Access Hollywood” tape describing lewd behavior with women. He’s criticized several remarks Trump has made as president, including his blaming of both sides for a riot at a demonstration by white supremacists in Charlottesville, Virginia, last summer. The two men’s relationship has run hot and cold.

Ryan’s hold on the speakership could end in 2019, regardless of whether he wants to keep the job.

Democrats will need to gain 24 seats in next November’s midterm elections to capture House control. Trump’s staggering unpopularity and recent Democratic victories have raised that party’s hopes of grabbing a House majority.

Ryan has given reporters an extensive preview of next year’s GOP agenda, promising action on restraining the growth of government benefit programs.

But Tuesday’s Senate election in Alabama, in which Democrat Doug Jones scored an upset, will bring the GOP’s margin of control in that chamber to 51-49, making any action on cutting the budget a longshot.