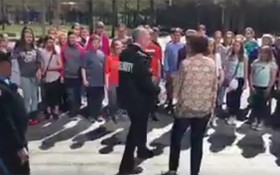 It may have been one of the most jaw-dropping, unpatriotic things ever seen. Some 50 students from Waynesville Middle School in western North Carolina were at the Sept. 11 memorial Wednesday and had just started singing “The Star-Spangled Banner,” when a guard ordered them to stop.

Sept. 11 memorial officials say groups wishing to perform on the crowded plaza are supposed to pay $35 to apply for a permit and obey a list of rules, such as no amplified sound and no interfering with the flow of traffic.

Teacher Martha Brown said Monday that a different security guard had given the OK for her students to sing. But the second guard said, “You just can’t do this. You’ve got to stop now,” Brown said. “So we very reverently and quietly stopped what we were doing and complied with his request and quietly exited the park.”

Video of the incident, seen below, has sparked outrage and led to an invitation for the students to sing the anthem live on Fox News. Brown and Principal Trevor Putnam joined the students for their performance at the school Monday.

Officials at the Sept. 11 memorial said Monday that their security guards shouldn’t have stopped the choir from singing the national anthem on the memorial plaza.

“The guard did not respond appropriately,” said the spokeswoman, Kaylee Skaar. “We are working with our security staff to ensure that this does not happen again with future student performances.”

Brown said her students learned from the experience. “We turned it into a teaching moment and taught them that even if you don’t agree with it, or understand it, you must respect authority,” she said.

“The lesson learned here is always to respect authority,” the principal said in a telephone interview. “And I’m so proud of our kids for conducting themselves the way they did.”

Crystal Mulvey, a parent who accompanied her daughter on the school trip, said she was shocked that the guard interrupted the national anthem because “it’s kind of a sacred song to us.”

Striking a balance between remembering those killed by terrorists and rebuilding a bustling commercial district has been a challenge ever since the twin towers were toppled in 2001. Tourists paying their respect to the dead now share the memorial plaza with neighborhood residents and office workers from the new World Trade Center towers lunching under the trees.

Visitors to the memorial had mixed feelings about the rules.

“To me, the children’s singing was in remembrance of people who had a soul. It was reverence for their lives so they’re not forgotten,” said Gwendolyn Tucker, herself a security guard from Los Angeles. But, she added, “the guards have to keep it orderly.”